Poststroke cognitive impairment is considered one of the main complications during the chronic phase of ischemic stroke. In the adult brain, the hippocampus regulates both encoding and retrieval of new information through adult neurogenesis. Nevertheless, the lack of predictive models and studies based on the forgetting processes hinders the understanding of memory alterations after stroke. Our aim was to explore whether poststroke neurogenesis participates in the development of long-term memory impairment. Here, we show a hippocampal neurogenesis burst that persisted 1 month after stroke and that correlated with an impaired contextual and spatial memory performance. Furthermore, we demonstrate that the enhancement of hippocampal neurogenesis after stroke by physical activity or memantine treatment weakened existing memories. More importantly, stroke-induced newborn neurons promoted an aberrant hippocampal circuitry remodeling with differential features at ipsi- and contralesional levels. Strikingly, inhibition of stroke-induced hippocampal neurogenesis by temozolomide treatment or using a genetic approach (Nestin-CreERT2/NSE-DTA mice) impeded the forgetting of old memories. These results suggest that hippocampal neurogenesis modulation could be considered as a potential approach for treatment of poststroke cognitive impairment. 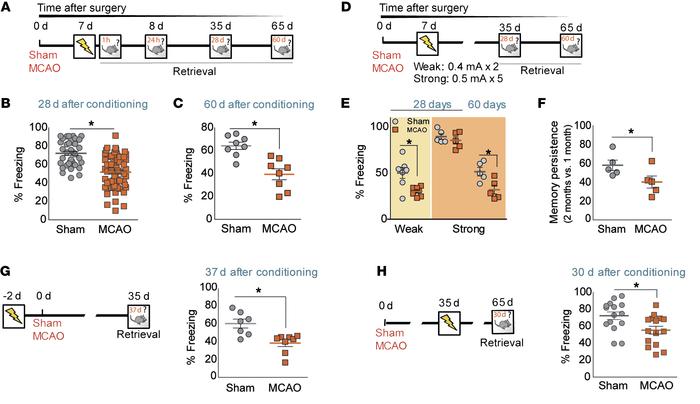